Vultures are globally threatened and populations in Africa have plummeted over the last three decades. Unlike in Asia, where vultures have disappeared largely due to a single cause (poisoning from ingesting a painkiller medicine fed to cows), African vulture populations have succumbed to a variety of human threats – including the illegal trade in vulture body parts.

Vulture body parts are purchased for traditional medicine and other belief-based uses. Consumers expect relief from a variety of physical and mental ailments and greater success in life as they absorb the vultures’ abilities to ‘see into the future’. Vultures are therefore often the most sought-after bird species in trade. While the trade in resident African vultures has long been known and acknowledged to be a concern to these populations from Nigeria to South Africa, it is so far unclear to what extent migratory populations are affected by the demand for vulture body parts in Africa. 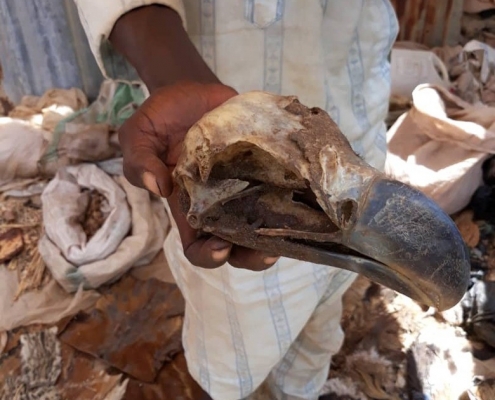 Head of a White-backed Vulture offered for sale at a market in Nigeria (Photo credit: J. Onoja)

The Egyptian Vulture (Neophron percnopterus) is the only long-distance migratory vulture in Africa, Asia or Europe, and its populations have not only declined in Africa, but also in parts of its European breeding range. Since 2011, BirdLife partners from the Balkans have been working to protect and study Egyptian Vultures, and in 2016, a new project was launched to address threats to the species in 14 countries along its flyway. Based on satellite-tracking of birds from the Balkans, the wintering range of Egyptian Vultures includes Niger and Nigeria – and  evidence shows that the direct persecution for the market trade in Nigeria affects Egyptian Vultures from Europe. Until now, however, we have had little information about the potential magnitude of the threat of the trade.

In 2018, we conducted surveys on several markets in Nigeria and Niger to determine the magnitude of the vulture trade with a particular focus on Egyptian Vultures. During the surveys, we first assessed how many stalls at each market sold any vulture part, then quantified the number of stalls that either have in the past or would sell Egyptian Vulture parts in the future. Sellers were asked about the origin of vulture parts on sale. Lastly, we asked about trends of vulture populations and what the sellers’ perceptions were about the causes of these trends. 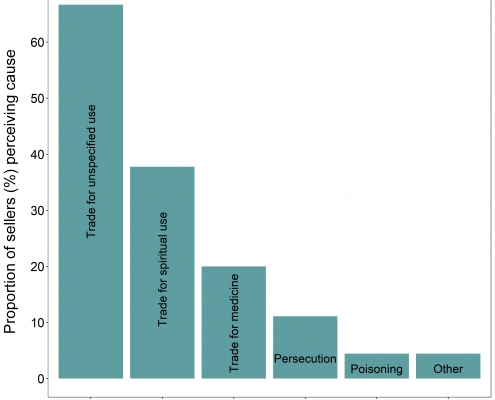 Market sellers in Niger and Nigeria perceive the most likely reason for declining vulture populations in these two countries to be the trade of vulture parts (Source: S. Oppel)

The main reason why we found no Egyptian Vulture parts on markets in Nigeria is because they have become very rare. All sellers agreed that the number of Egyptian Vultures had decreased and that they had become too difficult to find. Although sellers were willing to sell the species, the hunters that supply the sellers no longer encountered Egyptian Vultures. According to the sellers themselves, the main reason why the species has disappeared is because of direct persecution for trade, medicine, rituals or food. In Niger, most people also recognised that much of the hunting and trade that decimated local vulture populations was driven by demand and hunters from Nigeria. 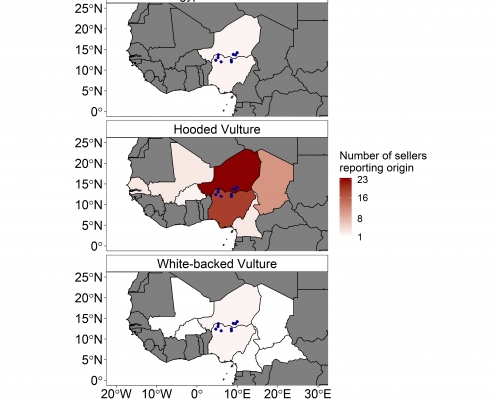 Map illustrating the locations of the markets surveyed in Nigeria and Niger (blue dots) and the source countries of the three vulture species, as perceived by market merchants (white to red color gradient) (Source: S. Oppel)

When sellers were asked where the vultures they sold originated from, only a fraction was reported to come from Nigeria directly. Because Nigerian vulture populations have now become scarce, market stalls in Nigeria are being supplied with vultures hunted not only in the neighbouring countries of Niger, Chad, Cameroon, and Burkina Faso, but also from further afield, including Mali, Senegal, and the Central African Republic. Thus, the high vulture demand in Nigeria is likely to be affecting vulture populations in a large part of sub-Saharan Africa.

In Nigeria, vultures are technically protected by law, with both the killing and trade of vulture species being illegal. However, this law is not enforced and without a reduction in demand, it is unlikely that the persecution will cease in the near future. To put this threat in context, if all the 397 Nigerian market sellers willing to sell Egyptian Vultures sold even just one bird a year, the entire eastern European population of Egyptian Vultures (only around 60 pairs) could go extinct rapidly. A new project has recently started to reduce the trade in vulture parts in Nigeria.