The largest ever dried shark fin seizures were made by Hong Kong authorities earlier this month in May 2020; the combined volumes of the two shipments from Ecuador more than doubled last year’s total volume. However, sharks are not the only marine wildlife trafficked transnationally. The persistent demand for their fins is but one side of a multi-dimensional global trade network of Haiwei.

The Chinese phrase Haiwei (海味) translates literally to “sea flavours,” and refers specifically to edible seafood products that have been preserved by dehydration. Although the consumption of dried seafood is widely documented throughout Asia and the rest of the world, here the term Haiwei is used to establish the identity of a specific culture of consumption and trade in dried seafood. Such a distinction is necessary because evidence is increasingly supporting that, if left unregulated, Haiwei represents a significant threat not only to the few targeted, endangered marine wildlife, but also to marine resources and ecosystems worldwide.

While the use of the phrase in literature dates as far back as the Southern Qi period (479-502AD), and its consumption has been documented across China throughout history, the current Haiwei culture is more commonly associated with Chaozhou, Shantou, Hong Kong, and other cities along China’s Southern and South-eastern coasts where historic connections to fisheries are part of cultural heritage and identity. Haiwei products are consumed for both culinary and medicinal values, and are generally considered tonic foods consumed for their alleged effectiveness in, for example, anti-aging, libido-aiding, miscarriage prevention, and haemorrhage healing. 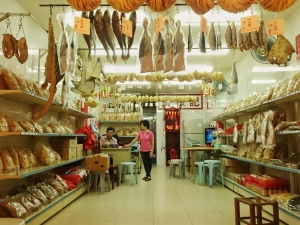 The term Haiwei is not widely known to the conservation community, but conservation issues directly linked to Haiwei trade and consumption have made international headlines over the past two decades. Examples include unsustainable fishing practices of shark-finning, transnational trafficking of abalone, overexploitation of sea cucumber, and the imminent extinction faced by the vaquitas as a result of illegal fishing of the totoaba for their maws (dried swim bladders). These are all “top-of-the-range” products in the Haiwei culture known colloquially as bào shēn chì dù (鲍参翅肚—abalone, sea cucumber, shark fin, and fish maw), a phrase that has become a Chinese idiom for extravagance. At the luxury end of trade, the per-gram prices of Haiwei products are comparable to that of rhino horn and elephant ivory, and similarly considered as investment assets.

The prevalence and impact of Haiwei extend beyond political borders, and the conservation implications of Haiwei is not limited to just a few taxa. Genetic analyses and official trade statistics on fish maws in retail markets of Hong Kong and Guangzhou have identified a global trade network of over 110 countries, and a growing connection with Central American, South American, and African suppliers.

Despite an increasing awareness of, and effort to address Haiwei in marine conservation, available literature provides only a glimpse to the bigger picture. This is in part due to the scale and complexity of the Haiwei culture, where an array of marine animal parts is extensively diversified to fulfil market niches. For example, fish maws are differentiated from low-value to expensive varieties. At the high-end of the market, trade literature identifies up to 66 genera under the Sciaenidae family as “prized fish maw varieties”, yet their trade names and their sources remain unclear. This disconnect between trade knowledge and conservation knowledge implies an absence of baseline data on which to form policy and management decisions. The conservation implications of such knowledge gaps are a cause for concern. Decisions to suppress the trade of one maw variety could perceivably fuel the demand in another to fill vacant market niches. This is especially alarming considering only one species (the totoaba, Totoaba macdonaldi) of the 66 named sciaenid genera is listed under CITES (Convention on International Trade in Endangered Species of Wild Fauna and Flora). Similar complex market structures have been reported for shark fins, mobulid gills, seahorses, and sea cucumbers. 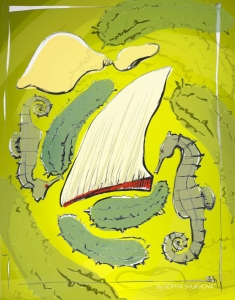 Awareness of the Haiwei trade has increased since it was identified as an emerging IWT issue in 2018 as part of the Illegal Wildlife Trade (IWT) Horizon Scan. Simultaneously, Haiwei-related conservation issues have been increasingly addressed at a policy level. At the 18th CITES Conference of the Parties (Geneva, 2019), two sharks and one sea cucumber—all of which are known to be harvested for the Haiwei trade—were listed under CITES Appendix II to increase trade regulations. Efforts to facilitate international cooperation to address seahorse and totoaba trafficking were also renewed. However, the overexploitation of marine wildlife for the Haiwei trade continues to decimate global biodiversity.

Our IWT horizon scan prioritised this topic as one of the top emerging issues, demonstrating the importance of addressing these knowledge gaps and the trade-conservation disconnect of marine taxa and marine ecosystems in the context of Haiwei culture. Without doing so, significant challenges to marine conservation and resource management will only continue. Although greater market research and genetic studies are beginning to bridge these gaps, the misalignment between trade and conservation knowledge persists due to a combination of cultural and language barriers, on-going product diversification and shifting trade dynamics, underpinned by the difficulties of studying and sampling high-priced, rare, and illegal products.

Greater proactive efforts are necessary to address and understand Haiwei as a conservation issue. Specific approaches proposed in the IWT Horizon Scan project (see Supplementary Material Appendix 3) include reviewing and analysing global dried seafood trade data to assess the extent and impact of trade, conducting market surveys as well as genetic studies along trade chains to supplement global trade data and maintain conservation awareness. With a better understanding of Haiwei, efforts can be made to optimise behaviour change campaigns, develop sustainable harvesting and consumption guidelines to curb overexploitation, inform enforcement agencies to assist in the implementation of trade regulations, and address policy gaps and loopholes.

With thanks to Nafeesa Esmail and Andrea Athanas for their helpful inputs into this piece.

Proactive engagement with wildlife trade issues in an unsettled world

On the IWT horizon: Species discoveries and descriptions that fuel wildlife...
Scroll to top