The most obvious impacts of illegal wildlife trade are on the individual tigers, orchids and lizards that are caught and sold.  However, illegal trade  can cause a series of cascading impacts, including on species conservation, rural communities, culture, science, and public spending.

These huge costs are too often overlooked.  The negative impacts are left for governments, citizens and NGOs to mitigate, while the responsible parties typically bear little of the burden (e.g., low sanctions in the UK).

​Criminal law is not enough 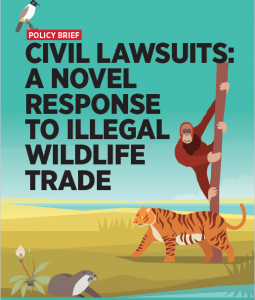 ​Enforcement against illegal trade usually relies on criminal prosecutions that impose fines and imprisonment, in an effort to punish, deliver a sense of justice and deter future perpetrators.   However, criminal law does little to remedy the harms caused by illegal trade.

Providing remedies can be addressed by other areas of law.  Notably, in most countries legislation allows a plaintiff to bring a lawsuit against a defendant that caused them harm, usually seeking financial compensation in return.  Such lawsuits are often about compensation for injuries that happen at work, but the same principles can apply for the environment.  Environmental liability litigation allows plaintiffs to seek remedies for harm that occurs to the environment, akin to the ‘polluter pays principle’.   Such conservation litigation could be a novel response to commercial illegal wildlife trade — used strategically against high-profile defendants involved in commercial trade and with the financial means to provide remedies, such as organised criminal groups and corporations (but not against small-scale or subsistence traders).

Remedies for harm to wildlife

Because the harms caused by illegal trade are so significant and diverse, the remedies sought via conservation litigation can be equally diverse.  For example, in a case involving the illegal, commercial trade of a Critically Endangered Bornean Orangutan, a conservation lawsuit might try to hold the responsible trader liable for providing several different remedies:  The harm caused to the individual orangutan rescued from illegal trade could be remedied by requesting that the wildlife trader pay for the cost of long-term captive that individual.  Harm caused to the species could be remedied through actions to help the Orangutan population to recover, seeking to replace the individual lost through illegal trade.

Orangutan trade also harms human wellbeing, including for all of the intangible, but important scientific, cultural, existence and bequest values we place on this iconic species. Those types of harm might be remedied through a public apology, and investment into cultural and educational activities.

Litigating a conservation lawsuit that provides these types of remedies could be very significant: It would not only support Orangutan conservation, but could help shift how people think about illegal trade.  It would reveal the true costs of illegal trade, and highlight new legal strategies for protecting biodiversity.

Lawsuits to request remedies for environmental harm are already used in some countries, notably in response to oil pollution cases, where polluters are sued to recover the costs of clean-up and to compensate victims (e.g., fishers whose livelihoods are affected).  However, such environmental liability lawsuits are uncommon in most countries, especially in the biodiversity hotspots and wildlife ‘source’ countries where illegal trade is often most serious. Yet, on paper, these types of lawsuits are legally possible in a surprising number of countries, including Mexico, Indonesia, the Philippines and the Democratic Republic of Congo.

Similar lawsuits could be used to deal with serious cases of large-scale, commercial illegal wildlife trade.  In fact, in 2019 a civil lawsuit in France was brought against illegal fisheries poaching inside a protected area, and against the luxury restaurants who bought fish. The protected area received financial compensation, in an effort to remedy the harm caused by illegal trade.   However, such cases are still exceedingly rare.

We developed a project that asks, “How can we sue illegal wildlife traders for the harm they cause?”  A collaboration among lawyers, economists and conservationists, we are developing a guideline for practitioners with a simplified approach for developing these lawsuits.  It recognises that these types of cases are new and complex, and that while most conservationists know little about law, most lawyers know little about environmental harm and remedies. This project seeks to fill that gap, to facilitate some of the first such lawsuits in the world.

We are now looking for conservation collaborators around the world–government agencies, NGOs, wildlife investigators and donors–ready to trial this new legal response to illegal trade. Read more at www.conservation-litigation.org. 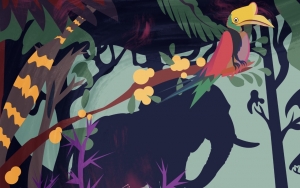 A drawing by Jaclyn Schwanke from “Pongo the stolen Orangutan: How Law Can Heal”

See the video of “Pongo the Stolen Orangutan: How Law Can Heal”, a collaboration with Wood Grain Media. It tells the story of Pongo, an illegally traded orangutan, and the ways in which conservation litigation could remedy the harm caused by illegal trade.

This project, based at the Lancaster Environment Centre and is supported by the UK Government through the Illegal Wildlife Trade Challenge Fund.

Complex interactions between commercial and noncommercial drivers of illegal...