Originally posted on The People and Nature Blog

In early 2019, I travelled to Ho Chi Minh City, Vietnam to conduct research on the consumption of meat from wild animals in local restaurants. I had shortlisted a few restaurants where this consumption took place and had the opportunity to visit some of them.

The restaurant we walked into was rather empty for a Friday night. Tall ceilings and open windows made the heavy wooden tables and chairs appear sparse in the open floor. My Vietnamese colleagues and I were led into a private room towards the back. It felt a lot cosier than the main room we had just come from. That was until a waiter stood guard at the door, clearly planning to stay put during the course of our meal. We kept conversation light while we took our seats and started flipping through the menu. My male colleague quickly took charge and started ordering drinks for us and suggesting dishes for me, the foreigner, to try. We were given a minute’s privacy as the waiter went outside to get our drinks; our façade crumbled as we huddled together.

“The waiter speaks English, don’t say anything in front of him” whispered my female colleague.

“Ask what specialty dishes they have available off the menu” another colleague said urgently. My male colleague nodded as the waiter came back in. The conversation in Vietnamese picked up – with lots of gesturing and glances to and from the menu. A second waiter came in and the talking ensued while I stared back and forth.

“They have civet, would you like to try?” translated my male colleague. My stomach clenched.

“Civet? What is that?” I asked feigning curiosity. Although that was the very reason I was sitting on that hard, wooden chair. In a couple of minutes, two more waiters entered to show the foreigner the fresh meat they had available. A shivering civet was curled at the bottom of a green mesh bag. It whimpered as it was weighed on a heavy metal scale. My eyes prickled. With straight, unconcerned faces we considered whether we felt like eating civet that night; as rehearsed, we declined and ordered other dishes. The civet was taken out of the room and before the door closed I caught a glimpse of other customers. Who else is sitting in a private room and will the civet make it onto their plates tonight? 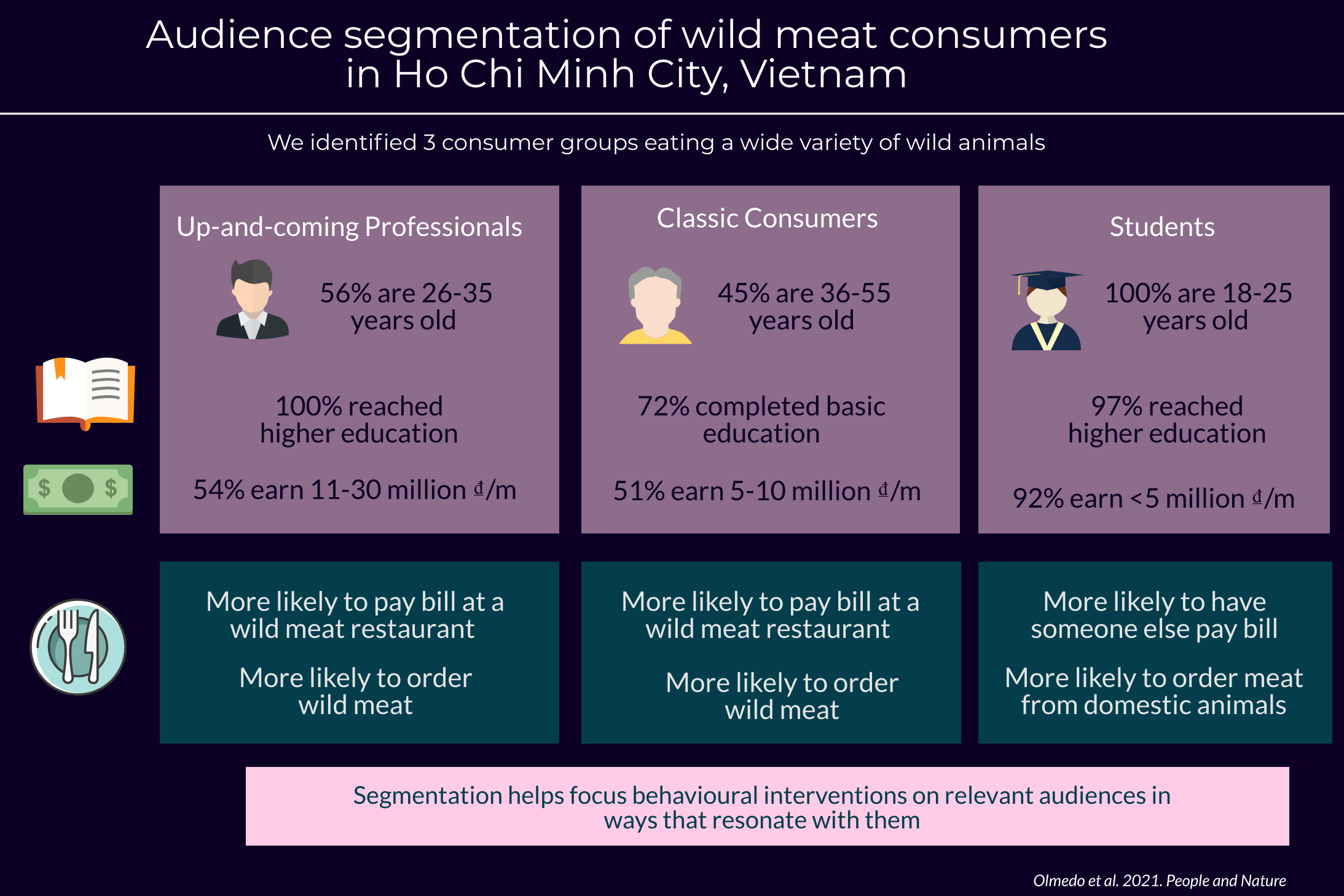 I had begun my research into the consumption of wild meat in Vietnam a year before and I was mapping a picture of the various contexts in which it is consumed at restaurants in Ho Chi Minh City. While surveys were being carried out nearby known wild meat restaurants, we wanted to witness the setting in which consumption took place. Even though some of the species served as wild meat may be legally sourced from farms, it is likely not the case for all animals served.

A few months after the night at the restaurant, I identified three different groups of wild meat consumers by carrying out audience segmentation, a social marketing technique used to discover different groups within a sample. Although the three groups consumed wild meat, they differed in their demographic characteristics, their agency at the restaurants and likelihood of ordering wild meat; thus, giving me a clearer picture of the restaurant patrons likely to have ordered the civet in the restaurant we visited. My results indicated each group’s consumption has to be influenced in targeted ways rather than using the same approach for all three. Segmenting consumers helped me identify one group with which to conduct further research to develop a targeted intervention to reduce their consumption of wild meat in restaurants. Although this will not resonate with every person who might have ordered civet that night, it is likely to speak to some and hopefully, will lead to a reduction in illegal and endangered species being offered to customers.