All interventions were assessed against this framework. Study findings illustrated a general lack of the use of each of these design elements.

Setting measurable objectives was possible for only one of the interventions due to a lack of baseline research.

Carrying out research prior to designing the interventions enables organizations to clearly identify a target audience and thoroughly explore the motivations driving consumption. However, only four out of nine interventions surveyed Vietnamese citizens to understand reasons for consumption and homed in on a particular demographic group for their intervention.

Only a third of the interventions delivered messages based on evidence that these might have the desired effect on the target audience. In addition, only two interventions were based on behaviour change models, indicating that in many cases assumptions had been made on how to achieve behaviour change. This is highlighted by the reliance on awareness raising, which has been widely used despite the lack of evidence that raising awareness of a particular subject leads to any change in behaviour.

Although one intervention identified indicators of success, the implementing agent did not follow a theory of change or behaviour change model. Several other indicators were measured and treated as evidence of success, but many of these measure progress rather than success. These include: social media activity (to gauge interest and engagement), anecdotal information (particularly for pre-testing messages and reactions of individuals at workshops), number of people reached by messages via social media, texts sent by telephone companies, exposure on TV and workshop attendance (which does not indicate whether the people exposed to these messages were consumers, to begin with). 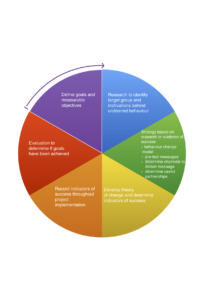 Whilst behaviour change may be a new tool to reduce demand for illegal wildlife products, lessons from other fields (i.e. public health, marketing and development) demonstrate there is no substitute for baselines, robust research and behaviour change models, which can be used to improve conservation interventions. Combining these valuable lessons with adequate support from governments is necessary to reduce demand for illegal wildlife products.

CITES and the international plant trade