The European eel (Anguilla anguilla), an important commercial freshwater fish species, native to Europe, the western edge of Asia (e.g. Turkey) and North Africa, has been exploited in nearly all of its range countries. Due to the species’ stock decline, it is currently classified as Critically Endangered by the IUCN Red List, listed in Appendix II of CITES and subject to EU eel regulation. Furthermore, export out of and import into Europe has been suspended since December 2010. Nevertheless, scientific studies have proven live European glass eels (juveniles) are illegally exported to Asia to be grown and farmed. Farmed European eel products are subsequently sold for consumption globally.

Eel larvae hatch in the Sargasso Sea, entering their freshwater habitats through rivers which drain into the Atlantic and Mediterranean Sea between North Africa and the Barents Sea from autumn until spring. Today, about 75% of juvenile eels are fished out of France and to a smaller extent from Spain, Portugal and the United Kingdom. Every year, at the end of the fishing season, we (The Sustainable Eel Group) survey the glass eel market to identify the destination of caught fish. In our last two surveys, we were unable to trace about 30 tonnes, equivalent to 50% of declared European glass eel catches. 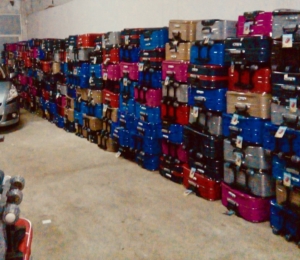 Figure 1: In 2018, 364 suitcases were found during operation ELVER, prepared and ready to move more than 5 tonnes of live glass eels from Europe to Asia. Credit: SEPRONA, Guardia Civil 2018

Environmental crime – including illegal trade in endangered species – has recently been identified as one of the EU’s 10 priorities in the fight against organised and serious international crime, therefore added to the EU Policy Cycle for 2018-2021. Glass eel trafficking is now recognised as one of Europe’s most urgent IWT issues and enforcement agencies are investing significant efforts into tackling the illegal exports.

According to enforcement reports, different modes of transport are used for exportation. Live glass eels are hidden in oxygenated, wet plastic bags, packed in suitcases and transported to Asia on regular flights by smugglers (Figure 1). Many of these suitcases have been seized in Europe, North Africa and Asia during the past few years. Large shipments are also hidden under other seafood products like fish and mussels, in air freight cargo containers or incorrectly declared as other unprotected eel species. Since European eels are one of very few, if not the only wildlife species originating from Europe and traded to Asia, border control faces a unique problem. Customs usually focuses on illegal goods that are brought into the country rather than what is exported out.

Based on intelligence from past police operations, Europol estimates 100 tonnes of glass eels, equivalent to about 350 million fish, are trafficked annually from Europe to Asia. We have estimated the eels’ value along the supply chain and conclude that processed eel fillets produced from 100 tonnes of glass eels are worth €2.27 billion at the consumer level. 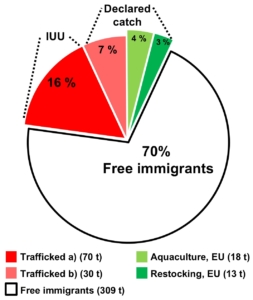 The trend in the number of glass eels which enter continental waters (called recruitment) is an indicator to assess the stock status. According to Bornarel et al (2017), annual European eel recruitment is about 440 tonnes (Figure 2). We merged this recruitment estimate with the knowledge of our market surveys and Europol estimates to get a sense of the scale and potential impact of eel trafficking on wild stocks.

The legal European demand for aquaculture and restocking programmes account for 7% offtake of the annual recruitment. Another 7% offtake accounts for the proportion of declared catches which could not be traced to a European destination over the past two years. Based on annual estimates of trafficked eel volume, we can presume another 16% of eels are from Illegal, unreported and unregulated fishing (IUU). In total, Europol’s estimate of 100 tonnes of illegally exported eels account for approximately a quarter (23%) of annual recruitment. Thus, it is highly probable that trafficking does and will only continue to dramatically impact the wild European eel stock.

Our future aims are to: (1) further quantify the specific impact on the stock; (2) study the Chinese eel trade and farm production data to identify declaration gaps indicating illegal input of eels into farms; (3) continue developing a chemical fingerprinting method that can facilitate tracing seized glass eels to where they have been caught; (4) and support University of Leicester’s development of a rapid DNA test that will enable border forces to identify the eel species within 1 hour.