Although it has been 20 years since all sturgeon and paddlefish species were listed on the CITES Appendices and the international trade of caviar has been regulated, the conservation status of sturgeons does not seem to have improved. What should be done to assist in the recovery of sturgeon populations? 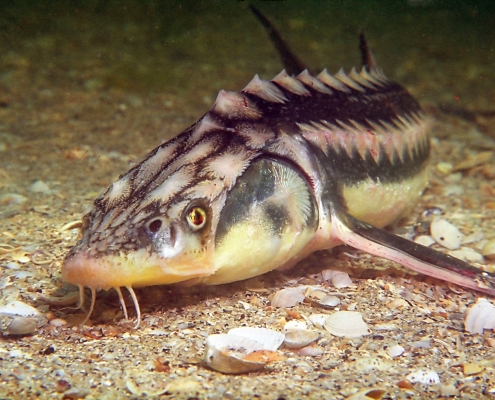 In addition to the CITES listing, systems have been established to support the effective implementation of the listing; one of these is a universal labelling system. A CITES Resolution recommends that all Parties implement this system for sturgeon caviar (wild sourced and derived from aquaculture) for international and domestic trade, so the commodity is traceable. Although CITES Resolutions are not directly legally binding, the labelling system has been transposed into national legislation, and thus is mandatory, in some countries, including within the EU.

Global caviar production and trade dynamics have changed over the last decades with the rapid growth of aquaculture production. According to CITES trade data, caviar sourced from aquaculture accounted for 95% of total global imports by weight in 2015. However, caviar sourced from wild sturgeons is still traded and there is little information available to determine whether this is legal, sustainable and traceable.

In fact, despite the introduction of CITES regulations and the rapid growth of aquaculture production, illegal fishing of sturgeon and the illegal trade in wild caviar have remained a serious threat to sturgeon and paddlefish. The Caspian Sea sturgeon population has reportedly continued to decrease dramatically despite the CITES listing. Anecdotal evidence suggests the occurrence of poaching in the Russian Federation, and a recent study indicates that consumer preference for wild caviar is a key factor driving illegal trade. Prevalence of the illegal caviar trade has also been linked to corruption.

In order to obtain a better understanding of current global caviar markets, TRAFFIC and WWF conducted a study to identify geographic hotspots for the legal and illegal trade in caviar and to review compliance with the CITES caviar labelling system. Rapid assessments were then carried out in six locations (China, France, Germany, Japan, the Russian Federation and the USA) between December 2017 and February 2018, through online and physical market surveys and a review of the available information on relevant legislation.

This research found that of these six countries, only two (Germany and France) have implemented the CITES caviar labelling system for domestic trade, even though all of these countries are Parties to CITES. In addition, even where the CITES caviar labelling system has been implemented for domestic trade, there were several instances suggesting the caviar labels did not fully comply with the CITES labelling requirements. These included instances where: i) the containers appeared to have no seals or packaging to show visual evidence of opening, and ii) the required lot identification number was missing from the label. 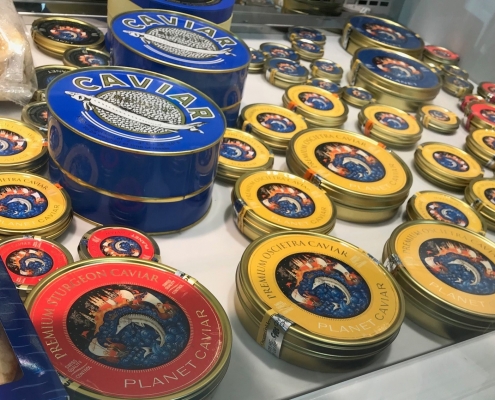 Furthermore, the study highlighted that, even when applied, the current implementation of the CITES caviar labelling system and related registration requirements may not be sufficient to combat illegal trade effectively, thus requiring further and more thorough examination. As global caviar production and trade dynamics continue to change, CITES Parties also need to consider making changes to the labelling system by revising the CITES Resolution to ensure consistency of quality of the labels and to minimise the risk of fraud.

While many people regard illegal fishing and trade in caviar as problems of the past, issues continue to persist. Strong support from the international community is needed to combat this illegal trade to help ensure the trade is not harmful to wild populations and to subsequently promote the recovery of global sturgeon populations.