Whilst some of the best-known examples of traded orchids are mass-market ornamental hybrids, or the countless products containing the seeds of artificially propagated Vanilla orchids, this legal trade is not the end of the story. Although artificially propagated orchids are widespread, with more than 1 billion traded internationally over the last decade, a large-scale commercial trade of wild orchids is also occurring, creating a pressing, but little-recognised conservation problem.  This is despite the fact that all species of orchids are listed by CITES, with orchids making up >70% of the CITES Appendices. 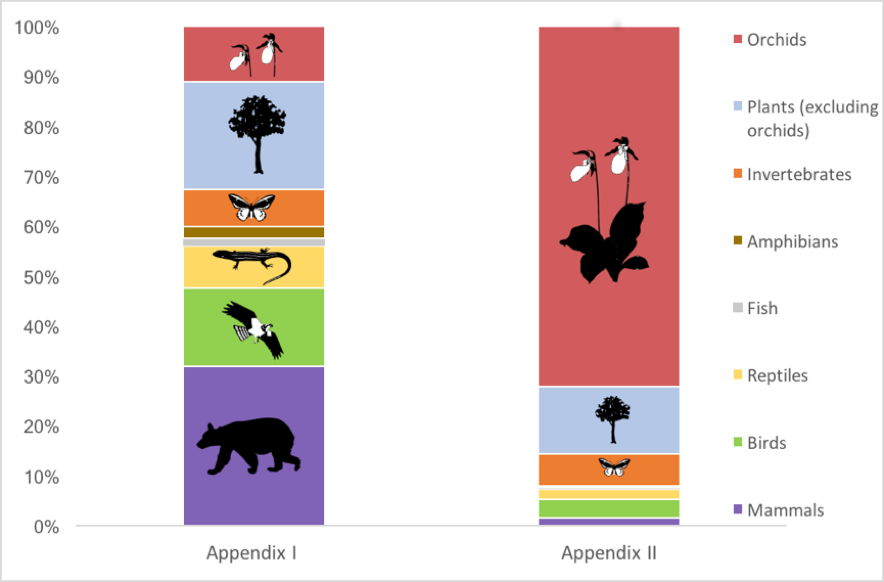 Taxonomic breakdown of CITES Appendices I and II, showing the large proportion of orchids in the total number of species listed by the Convention. Adapted from Hinsley (2016) using updated data from UNEP-WCMC (2015). Vector images courtesy of the Integration and Application Network, University of Maryland Center for Environmental Science (ian.umces.edu/symbols/)

To draw attention to this issue of illegal and unsustainable trade, a new review paper published in December 2017 by an international team of authors from the IUCN Orchid Specialist Group’s Global Trade Programme provides the first global overview of the orchid trade. The authors highlight the main types of trade, which include:

In addition to the well-known Vanilla trade, there are several other examples of orchids being used as ingredients in food and drink. This includes regional demand for two products made from the ground tubers of terrestrial orchids: chikanda cake in Central and East Africa, and salep, which is used to make hot drinks and ice cream in Turkey and neighbouring countries.

Orchids are used in traditional medicine systems around the world, from subsistence to commercial levels of exploitation. Some of the most widespread, commercial medicinal uses of orchids include Chinese Traditional Medicine and South Asian Ayurvedic medicine, but they are also known to be used traditional and folk medicines of other regions, as well as globally in various health supplements.

This trade is, unsurprisingly, dominated by species with attractive flowers, but it also includes species admired for their unusual growth habits, miniature size, scent, and patterned leaves. While the vast majority of contemporary ornamental orchid trade involves artificially propagated plants and cut flowers cultivated in commercial greenhouses, it can also include wild, often illegally-harvested plants traded on commercial scales.

These trades have all been linked to over-harvesting, causing decline and extirpation of species from their natural ranges. There is also evidence from a recent study of Southeast Asian ornamental orchid trade, that countries are not benefitting equally from the trade in their own species, with countries such as Laos, Myanmar and Viet Nam contributing large proportions of their species to international trade, whilst selling very few themselves. This creates a further problem related to Access and Benefit Sharing, on top of the direct conservation threats to species themselves.

The main conservation challenges associated with the orchid trade are those linked to the trade itself, such as the threats from unsustainable and illegal forms of harvest and trade, or the shifting patterns of consumer and supplier behaviour that make monitoring and regulation difficult. However further challenges are associated with the taxonomic complexity of the family, which presents management challenges for species identification, and the basic gaps that exist in ecological data and conservation status assessments, which limit sustainable management of orchid resources.  Finally, institutional barriers arise from the low priority placed on plants within broader efforts to address the unsustainable wildlife trade, and limit the legal international orchid trade in ways that constrain scientific exchange and potentially beneficial commerce.

To address these challenges, the authors conclude that the conservation community should focus on four key areas:

One way in which at least two of these priorities can be addressed is to improve the existing monitoring of international trade. Another new paper published in November 2017 demonstrated a simple method that can be used to help determine whether newly discovered orchids in trade are likely to be of wild origin. The method uses growth timings of plants to determine when legal, artificially propagated material of newly described species will be available for international trade.  With some further research, this could be used to create a ‘Species to Watch’ list to identify when a plant being traded could only have come from the wild.

Changing the way you problem solve