According to a recent report by two Bolivian researchers, between 2014 and 2016, 344 jaguar fangs destined for China were seized by the Bolivian Forestry and Environment Police. This number of fangs implies the killing of at least 87 jaguars. The authors of the report also found that radio advertisements and flyers promoting jaguar trade were being distributed in towns in northern Bolivia. The authors believe that this rise in jaguar trade may be linked to the presence of Chinese development and infrastructure companies operating in the country over recent years.  It is alleged that the fangs were being traded primarily by Chinese citizens residing in Bolivia. It also suggests a connection with the trade of tiger parts in China, which are used for medicinal purposes.

Additional evidence of jaguar trade in Latin America comes from a WWF study in Surinam, where eight people were found to be in possession of jaguar fangs or meat, and two people admitted to being regular suppliers of jaguar products. Like in Bolivia, some of the people implicated in the trade of jaguar parts in Surinam were of Chinese ancestry. More recent news on jaguar trade came from Belize in January 2018, after two decapitated jaguars were found floating in waterways near Belize City. Although Belizean authorities are offering a reward of $10,000 dollars for information about those jaguar killings, there are no further details about the poachers or the buyers.

As part of my PhD research at the University of Oxford, I have studied this emerging threat to jaguars by analysing published sources and conducting informal interviews with experts on the matter, who are based in the countries where these reports have originated. From my research, I have learned that like jaguars, this recent wave of jaguar trade remains elusive and filled with uncertainty. Those who are closest to the emerging issue of jaguar trade concur that we do not yet understand the scale of this trade, the motivations behind it, or the drivers of supply. Despite this vast uncertainty, over a dozen news reports have been written on the issue in the past year, including in reputable sources such as Nature News, National Geographic and The Guardian. The stories that are being told by the media, however, are filled with dangerous assumptions about jaguar trade that are not supported by evidence, and which could be detrimental to the survival of the species.

There are many problems with the information that is being distributed about jaguar trade. The first issue being the potential scale of this illicit activity. For example, it has been said that the seizures carried out by Bolivian authorities represent around 10% of the actual number of jaguars that could have been killed for trade in the country from 2014 to 2016, meaning that around 870 jaguars could have lost their lives in the past years to jaguar trade. This percentage is most likely drawn from customs seizure data on non-wildlife contraband, which has been used in the past to estimate the detectability of ivory in the international trade. However, not only is the 10% figure poorly evidenced for ivory, the detectability of jaguar fang trade has not been systematically monitored. If we assume that fangs are easier to trade than ivory due to their smaller size, the scale of jaguar trade could possibly be higher. 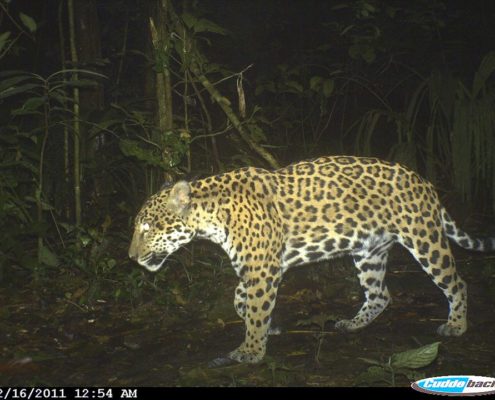 Secondly, news reports link jaguar trade to the trade of tigers in China, which are used for Traditional Chinese Medicine. The logic behind this assumption is that since wild tiger populations are so low, wildlife traffickers are seeking substitute products in Africa and Latin America, with lions and jaguars being suitable candidates. While there is strong evidence of trade of African lion bones into China and South-East Asia, labelled as tiger bone products, the same cannot be stated for jaguars. More specifically, the data that exists on jaguar trade is concentrated on fang seizures, which are not the main focus of Traditional Chinese Medicine. Felid fangs tend to be used for ornamental purposes globally, including in countries like Bolivia, Belize and Surinam, suggesting that the emerging trade in jaguar fangs may have a different market than that of lions and tigers, and it is very likely that this market is domestic as well as international.

Thirdly, news outlets have been very quick to point fingers, blaming Chinese companies operating in Latin America and their workers for the rise of jaguar trade. However, my conversations with experts on the issue revealed that there is no evidence that the Chinese citizens implicated in the Bolivian jaguar fang seizures were associated with any Chinese corporations. In fact, they appear to be well established Bolivian residents that arrived in the country some time ago. The same appears to be the case in Belize and Surinam, where jaguar trade appears to have an even smaller connection to China and its corporations. This kind of unsubstantiated assumption involving the reputation of people, businesses and countries is not appropriate.

Fourthly, the media jumps to the conclusion that at present there is an active incentive to hunt jaguars to trade their body parts. While this certainly seems to be the case with the decapitated jaguars in Belize, it is too early to rule out other possibilities regarding the origins of the seized fangs. For example, retaliatory killing of jaguars as a result of livestock predation is well documented across Latin American countries and is one of the main causes of jaguar deaths. Therefore, it is possible that the jaguar fang trade is a by-product of conflict with jaguars or other opportunistic killings. One expert I consulted with suggested that the confiscated fangs could have originated from old stockpiles dating back to the 1950s and 1960s, when jaguars were heavily hunted for the fashion industry. To date, no tests have been done on the seized fangs to determine their age and origin.

Finally, what is most concerning about this recent media attention around the jaguar trade is that most of the news reports include information about the price of jaguar products. Disclosing such information can have serious implications for jaguar conservation as it may influence the behaviour of poachers, luring them into this potentially profitable illegal activity.

In a time of fake news and alternative facts, it is extremely important for conservationists and others to be critical thinkers and responsible users of the information that we receive on a daily basis. All of the assumptions about jaguar trade that I described above could potentially be correct, but are currently lacking a solid scientific foundation and should therefore not be treated lightly. Despite their good intentions of raising awareness, some reports are in danger of crossing the line of being unethical and irresponsible, with respect to both the animals and the humans involved. Research and collaborative efforts are needed to close these knowledge gaps and to adequately respond to this worrying threat to Latin America’s most iconic wild cat.

How a null result sets the record straight on Harry & Hedwig