The global legal trade in wildlife products is vast, with an estimated value in excess of US$188 billion in 2012. Unsustainable harvesting of wild populations driven by demand can lead to population reductions or even extirpation of species from some areas. Furthermore, through unregulated trade, humans, native species and livestock are at risk from disease and pathogens which can lead to significant outbreaks, causing both social and economic harm. Wildlife trade is now one of the most pressing threats to species survival globally. Various international organisations and treaties exist to monitor both the legal and illegal trade in wildlife products. The main body monitoring legal trade is The Convention on the International Trade in Endangered Species of Wild Fauna and Flora (CITES) which maintains a database of legal trade. Unfortunately, despite being an excellent resource, the data collection relies on the submission of annual reports, which can be undermined by weak domestic legislation and governance. Consequently, there are inconsistencies in reporting standards and in submission of annual reports across the signatory countries, leading to potential underreporting issues and undermining the reliability of some data. Correspondingly due to the clandestine nature of the illegal trade and the complexity of the criminal networks involved, it is difficult to characterise, quantify and police, hence our knowledge is limited.

In our recent study, we developed a gravity–underreporting modelling framework to analyse and compare data on: (i) the legal trade in mammalian, avian and reptilian products recorded by CITES and (ii) seizures of illegal products entering the USA between 2004 and 2013. Gravity modelling is a technique commonly used in the study of international trade to characterise the drivers and strength of bilateral trade routes. In their simplest forms, these models assume the level of bilateral trade (gravity) is determined by the economic masses of the countries and distance between them, in the same way the Newtonian gravity estimates the attraction between two bodies. These models can be easily augmented with other terms such as institutional distance, common language and contiguous borders, and thus can be used to explore what national level factors determine the volume of trade between two countries.

We found legal and illegal wildlife trade to be broadly in line with the assumptions of the gravity model, with trade volumes increasing with importer and exporter GDP and decreasing with distance. However, we found substantial differences in the factors driving legal trade for the 3 taxonomic groups considered (mammals, birds and reptiles). The differences suggest that each product group has an individual and distinct market. It is essential, therefore, that conservation addressing the demand side of the trade explicitly recognises the distinct drivers of the markets they aim to reduce, otherwise their effectiveness is likely to be limited. Furthermore, our study illustrates the ability of CITES to effectively monitor trade varies with species or product groups. Reptiles and birds are considered less well-regulated than mammals. It is likely that trade in less well studied groups (such as corals, timber and orchids), is also less well-regulated, undermining the ability of CITES to prevent trade-driven declines in these species. 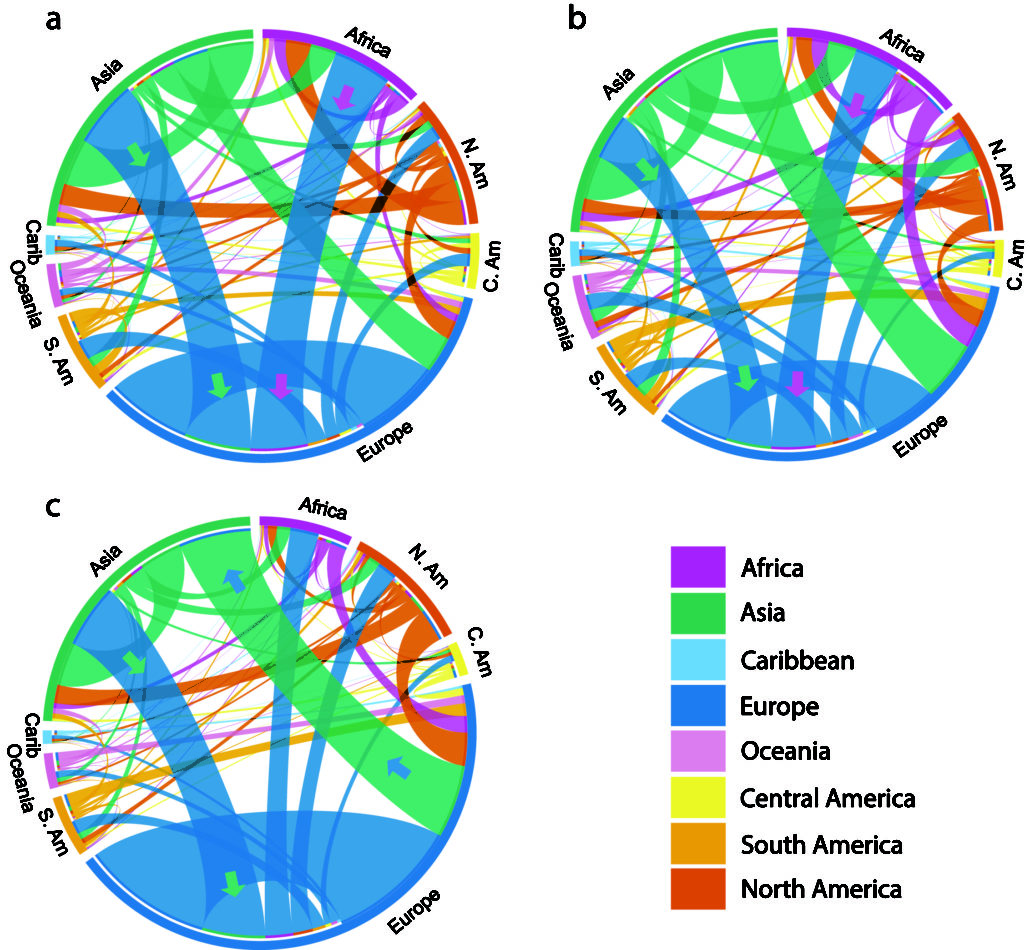 With regard to illegal trade entering the USA; Canada, Mexico and China were the 3 largest exporters across all three product groups. However, our results allowed explorations of where we would expect to see illegal trade but don’t, most likely due to the trade not being intercepted. Similarly to the legal trade, we found this was more likely for avian and reptile products, and for all products from Central Africa, Central Asia, Eastern Europe and Pacific Island states. The regional differences in underreporting suggest the existence of complex illegal networks, and illegal products from these areas are likely to move to the USA through intermediary countries.

Our results show the important regional and economic trends driving wildlife trade, as well as reinforcing the need for further studies of less well-known species groups to draw a better picture. Our new modelling framework can also help illuminate previously unseen aspects of illegal and legal wildlife trade, which can help with the implementation of interventions to curb the impact of trade on wild populations if applied to different species groups and import countries.