Recently on 11th March 2018, the biggest nationwide bird singing contest, Jokowi President Goblet Singing Bird Competition 2018, was held in a popular locality in Bogor, West Java. 700 participants competed for the President Goblet 2018 and other luxurious prizes such as 30 million rupiah, an exclusive trophy and a brand new car. As stated by Omkicau, one of the biggest songbird news platforms in Indonesia, this event had 10 categories participants could compete in, ranging from the most exclusive (President, Istana, Kebun Raya Bogor and BnR Classes), which required competitors to use a specific cage, to categories which did not have any specific requirements. Not only did songbird hobbyist club members enter this competition, but the Indonesian President, Mr. Jokowi, also participated by entering his own champion White-rumped shama (Copsychus malabaricus), Murai batu to compete in the President Class. The Minister of Environment and Forestry, Siti Nurbaya Abubakar, also attended the competition and accompanied Mr. Jokowi as he released 500 birds as the part of the event – a sign of pride or a threat to wildlife?

An entrenched yet unsustainable culture…

To monitor the growing songbird market and species trends, and to support the efforts of the recent Song Bird Crisis Summit in 2017, WCS has been monitoring three active and large bird markets in Yogyakarta and Central Java. From the first year of monitoring, 54,421 individual birds from 197 species were found to be traded in these three markets. Among them, three species are listed as Critically Endangered (CR), one species is Endangered (EN), four are Near Threatened (NT) and eight are Vulnerable (VU), as per the IUCN Red List (activity report available upon request). These results complement findings from a TRAFFIC report confirming 19,036 individuals of 206 bird species were traded in 2015 in three of the largest bird markets in Jakarta.

Evidence has shown the growing bird pet trade has been triggered by the growing interest in participation of songbird competitions as well as the establishment of hobbyist clubs in each area. In terms of the cultural affinity of bird keeping, a previous study identified that most pet bird owners in Indonesia are Javanese. Socio-economic and education status have also been shown to play a role in characterising bird-keepers and determining the type of bird they own. Indonesian households owning wild-caught birds, such as the orange-headed thrush, were found to be those with higher income and education levels. Households keeping commercially-bred species were richer, but not better educated; and in comparison, there was no difference in education or socio-economic status of those keeping domestic species. This economic association has been further strengthened by a recent study confirming the correlation of richer households with a higher probability of owning captive-bred birds. Interestingly, this study also notes perceptions of the song quality of captive-bred and wild-caught birds (notably the white-rumped shama) to be contradictory depending on whether owners had wild-caught or captive-bred bird species, which along with price, favoured their choice of which type of bird they kept. Therefore, the proposal that promoting certification for breeders could enhance the capacity of a captive-breeding stock may be a viable option, if consumer demographics and preferences are taken into account.

Recognizing that the pet songbird trade is moving from physical marketplaces to social media platforms, a word cloud was created to illustrate the most frequently used words to advertise songbird sales on social media. This included species names and attractive words describing bird characteristics (from the traders’ perspective). Advertisements of songbirds for sale on Facebook and popular Indonesian online market platforms (i.e. Tokopedia, Jualo and Olx.co.id) were collected. The advertisement text was copied, and the main words, relevant to the species name, were isolated to construct the word cloud (below) using an online word cloud generator to indicate the most traded species. This word cloud identifies the white-rumped shama as the most popular traded pet bird species, which is coincidently also the same bird species that President Mr. Jokowi keeps as a pet. 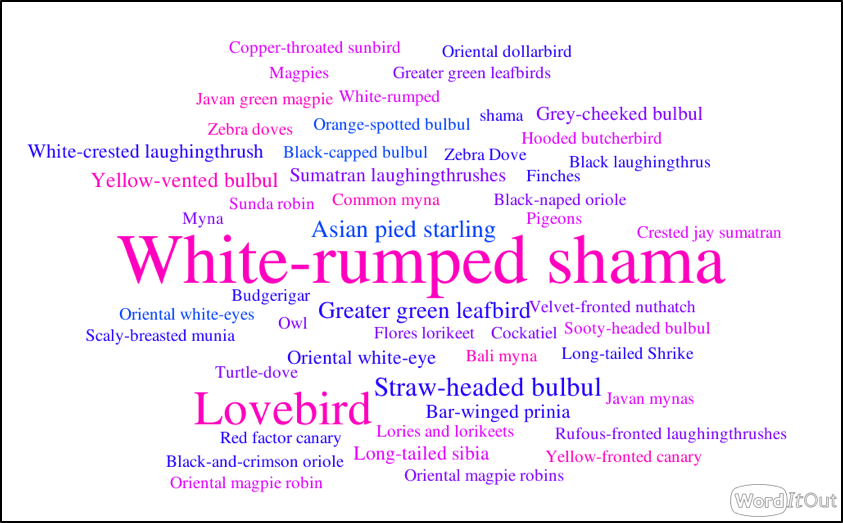 Word cloud based on the birds most traded in Indonesia through online market platforms and social media.

The gravity of wildlife trade