Seafood consumption in China has increased significantly over the past three decades, and, together with collaborators, my research under a Branco Weiss – Society in Science Fellowship over the past five years has examined the drivers and effects of this rapid growth in consumption and trade. While Chinese per capita consumption rates are still lower than in many other countries (e.g. Japan), the sheer scale of population in China means that Chinese consumption choices have significant impacts on marine wildlife trade.

As the middle-classes and their wealth have increased, Chinese seafood consumers have looked to consume a greater diversity of species and product forms than previously, and are importing more seafood from overseas. A distinctive feature of the Chinese seafood market is consumption of high-value, so-called ‘luxury seafood’ at banquets. The emphasis on seafood in these banquets in part derives from the expansion of Cantonese cuisine since the 1980s. Cantonese cuisine is a particularly high-status cuisine, and has an emphasis on fresh seafood. Typical seafood dishes served at these banquets include lobsters, abalone, crabs, reef fish, shark fin, fish maw and sea cucumbers.

China is the primary market for many of these seafood products, and overfishing to meet this demand has been well documented: Napoleon wrasse, for example, are Endangered and listed under CITES Appendix II, while 38% of sea cucumber fisheries are overfished, seven species are endangered and 24 countries have closed or attempted to close their sea cucumber fisheries due to overfishing. Furthermore, much live reef food fish continue to be caught using destructive fishing methods of cyanide. While the trade in such seafood does bring economic benefits to coastal households who in many cases rely heavily on it for their livelihood, the environmental costs are clear.

Attempts to regulate these supply chains to promote environmental sustainability face several major hurdles. In low-income contexts where much of this luxury seafood is sourced (e.g. remote areas of Southeast Asia, Pacific Island countries), governments and fishery managers must balance the need to effectively regulate fisheries with strong local needs for short-term cash and aspirations for improved livelihoods. Along the supply chain, the sustainable seafood movement has developed as an attempt to regulate seafood trade through market pressure. However, there is currently not a strong market demand for sustainable seafood in China. Because of the high incidence of food crime in China, consumer preferences about food safety and food quality strongly overshadow any preferences regarding environmental sustainability. Environmental sustainability is instead widely conflated with legality, and environmental regulation is seen to be the responsibility of governments, not market actors such as consumers or traders. Additionally, any attempt to better influence the consumption of seafood on environmentally sustainable grounds in China (e.g. through listing of additional species on CITES) is strongly hampered by the widespread problems of seafood traceability. In particular, the so-called ‘grey trade’, which involves illicit trade of seafood into mainland China via nearby trading hubs including Vietnam and Hong Kong in order to evade import tariffs, greatly contributes to the problem of poor traceability of luxury seafood in mainland China. 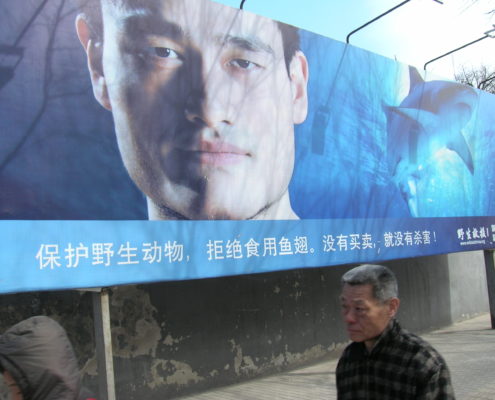 Yet, there are emerging positive developments. In 2017, local environmental NGOs mounted a strong and successful campaign to pressure JD.com, a massive Chinese online retailer, to remove southern Bluefin tuna from their platform. Another environmental NGO is developing an online sustainable seafood consumption database. Shark fin consumption within China appears to be slowing or declining, due to a range of factors. An environmental campaign led by WildAid has contributed to awareness of overfishing of sharks and just as importantly, was local consumer distrust of so-called ‘fake shark fins’, manufactured using gelatine. Several journalistic exposes on this phenomenon, combined with widespread fears of food safety and quality, meant that shark fin became less appealing. Finally, a governmental anti-corruption crackdown has reduced the amount of money spent on banqueting, which has impacted on the luxury seafood sector more broadly. The central government has also been exerting pressure on the grey trade, which is forcing more seafood traders to operate through direct trade channels, improving traceability. Ultimately, it is such public concerns around food safety and quality, and governmental efforts to improve governance more generally, that in the long run, may contribute the most to improving sustainable seafood consumption in China.

The songbird market and growing bird competitions in Indonesia