The Caribbean West Indies is a hotspot for reptile diversity. Although small in area (< 0.15% of the earth’s land surface), these islands are home to over 6% of all known reptile species! Nearly every island has a unique community of endemic reptiles, and new species are regularly discovered, or in some cases, rediscovered. Living on a tropical island has its downsides though – the West Indies region has the highest rate of reptile extinctions globally. Island populations are often naturally small and restricted, making them especially vulnerable to anthropogenic disturbances, including habitat loss and invasive species. This is particularly the case for Caribbean island reptiles, which are facing a new threat; poaching to supply the international pet trade.

In partial fulfillment of the University of Cambridge MPhil in Conservation Leadership degree, and in collaboration with Fauna & Flora International, I investigated the online trade in Caribbean reptiles, focusing on the Lesser Antilles region. To do so, I conducted: (1) an online trade survey of all known terrestrial reptile species in the Lesser Antilles, and (2) interviews with key informants across a sample of Lesser Antillean nation-states to better understand the socio-economic factors that drive trade. Subsequently, this information was combined to develop a framework of conservation measures. I summarize the results here, which I hope will stimulate further interest in the conservation of what I’ve come to appreciate as an incredibly diverse, beautiful, and fascinating group of wildlife.

At the time of the study, the Lesser Antilles contained 106 known terrestrial reptile species, and 41 of these (39%) had evidence of being traded online. Twenty-nine species were listed as threatened, and approximately one-quarter of these were found for sale online. Furthermore, 26 of the 54 species yet to be evaluated for the Red List were also found for sale online, many of which are certainly of conservation concern. The majority of online sales occurred on websites from the US and EU, respectively, followed by Japan. Although the method used to assess each species was systematic, an exhaustive review was not possible, and the method did not account for non-English search engines. For these reasons, the results reflect what is likely only a glimpse of the total scale and diversity of Lesser Antillean reptiles traded online. The survey also clarified that a few individuals were facilitating the bulk of the online trade, and were sourcing reptiles illicitly. Although unknown to me at the time, this information would later prove useful in unravelling the complex network of illegal trade.

To better understand the socio-economic factors underlying the conservation challenge, I interviewed government wildlife and enforcement officials, both local and international NGO representatives, academics, and protected-area managers across four target islands in three Lesser Antillean nation-states. Each interview consisted of nine questions to evaluate the types of conservation measures respondents felt would be socially and culturally acceptable to implement, such as trade bans and regulation, enforcement, sustainable use, education and awareness, and protected areas. The survey also aimed to identify barriers to implementing conservation measures, and allowed each interviewee to propose their own solutions. Additionally, I had the opportunity to speak candidly with poachers and a suspected reptile smuggler, and these conversations turned out to be the most insightful of all. Through these discussions, I was able to better understand the political ecology that allows the illegal reptile trade to persist. Furthermore, I was able to piece together a Caribbean-wide wildlife trafficking network linking back to the individuals identified during the online trade assessment.

Using all the information gathered from the online assessments, social surveys, literature review, and personal observation, I developed a conceptual framework of optimal measures for the conservation of Caribbean island reptiles. Although designed with illegal trade as the central focus, having witnessed the impacts of habitat loss and invasive species firsthand, I soon realized that a strategy focusing solely on trade would unlikely result in any long-term conservation gains. As such, the framework was designed to target multiple threats simultaneously, with the overall aims of: (1) strengthening domestic sovereignty over natural resources, (2) providing economic incentives to conserve, and (3) fostering a sense of national pride in native wildlife. To achieve this, the framework contains six elements (Figure 1), which are meant to be treated as multiple components of a single synergistic strategy. 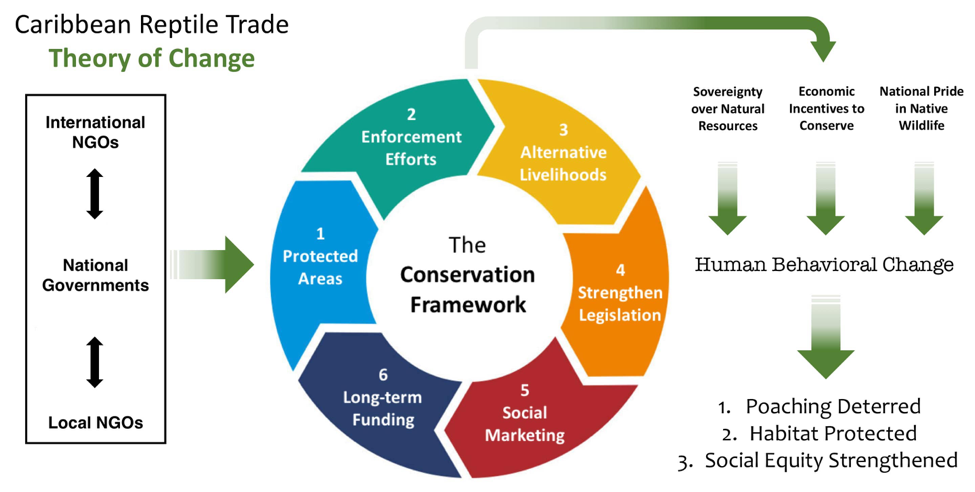 Collectively, these six elements – protected areas, targeted enforcement, alternative livelihoods, strengthening legislation, social marketing, and innovative financial mechanisms – are predicted to cultivate the human behavioural change necessary for the long-term conservation of Caribbean island reptiles, whilst also benefiting many other species of wildlife. However, the framework cannot be implemented in full by any one institution, therefore requiring collaborative efforts between national governments, and both local and international NGOs, to leverage organizational strengths and provide support. Hopefully, by designing a holistic approach to what is a highly complex issue, this framework will serve as a meaningful tool for the conservation of Caribbean island reptiles.

Due to the sensitive nature of the project, species, locations, and other specifics have been withheld. If you would like to learn more about this study for the purposes of conservation, please contact the author directly.