Since the 2012 Asian Scientist report on the issue of consumption of horn products of the Critically Endangered saiga antelope in Singapore, not much has changed. Saiga products remain widely available in almost every Traditional Chinese Medicine (TCM) shop in Singapore. Popularly known as “Ling Yang Jiao” to the Chinese locals in Singapore, these slightly translucent, ribbed horns are sold in various forms: whole, as shavings, dissolved in “cooling water” and as trace amounts in tablets. Consuming saiga horn (ling yang, 羚羊) products is believed to be effective in ‘cooling’ the body to cure related ailments such as fever and sore throat.

Demand for horns utilized in TCM in various consumer countries has been the primary driver of massive population declines for this nomadic herding species. Following conservation action, the species has started to recover, but catastrophic mass die-offs from epidemics in recent years continue to undermine its recovery. Together, disease outbreaks and ongoing poaching, especially of males for their horns, have resulted in saiga antelopes facing an uncertain future.

The species was listed under Appendix II of CITES in 1995. In Singapore, this means that traders can trade the horn as long as they have a CITES permit issued by the country’s authority, the Agri-Food & Veterinary Authority (AVA). A 2010 and 2016 study (TRAFFIC, unpublished) found that Singapore continues to play an important role as the main hub of saiga horn trade, fueling high-quantity exports to Hong Kong, China and Malaysia, from its stockpile which was mainly imported from Russia and Hong Kong in the 2000s. Because of this domestic stockpile, saiga products continue to be domestically traded.

The ongoing availability of products in local shops suggests a continued demand, prompting the need to gain an understanding of saiga horn consumption among Singaporeans. In our recently published study, we interviewed 230 Chinese Singaporean respondents to: i) gauge the prevalence of consumption, ii) identify the demographics of users, non-users and lapsed users, iii) identify consumption and purchase behaviours, iv) identify the motivations and barriers to consumption, and v) gauge consumers’ level of understanding of the conservation status and harvest of the saiga antelope. 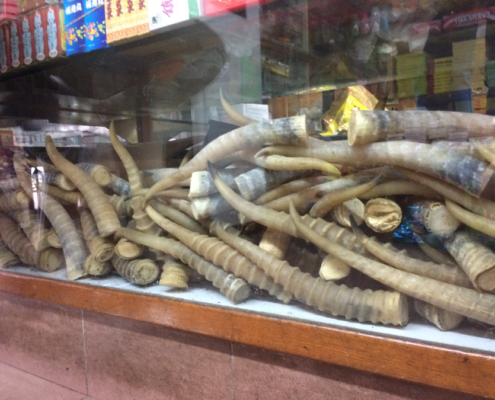 We found a relatively high ongoing use of saiga horn products in Singapore (13% prevalence), with the trade not appearing to decline. Contrary to our initial assumption that the main local consumers are elderly (>60years), this age group had the lowest prevalence of recent consumption (9%). Surprisingly, the younger respondents (18–35 years) had the highest prevalence of recent consumption (25%), often as a result of influence from an older family member or friend. This is likely due to the general belief that the cooling effects of saiga horn are detrimental to the health of the elderly, a point made by several elderly respondents during the survey.

Our study suggests that this consumption behaviour is not particularly price-sensitive, but likely to be influenced by the banning of products or by an awareness that its consumption drives species endangerment and cruel harvest practices. This indicates the potential for raising conservation awareness to reduce demand, especially since awareness about regulations, status and harvest methods relating to the species was found to be low. This approach has been effective in decreasing the demand for shark fin in Singapore and could also be leveraged to reduce the trade in saiga horn.

It appears that many of our respondents already use alternatives to saiga horn. The use of horns from other species (i.e. water buffalo Bubalus bubalis, sheep Ovis aries and goat Capra hircus) as substitutes does not appear to be popular, possibly because they are perceived as being too weak to cure ailments such as persistent fevers (according to vendors) or are usually sold in the form of shavings rather than the more popular cooling waters. The synthetic alternative, “Panadol”, was quoted to be a popular alternative primarily because it is more widely available.

This study was the first in Singapore to examine consumer relationships with a TCM product derived from a Critically Endangered species. Although suggestive findings have emerged, the study was exploratory in nature and findings are neither representative nor conclusive.

HIPUganda (History in Progress Uganda)Understanding the role of ivory traders by leaving the ivory tower: the value...
Scroll to top