Illegal wildlife trade not only concerns fauna, but also flora, such as tropical hardwoods. In a 2016 UNEP-INTERPOL report, the value of global forestry crimes, including corporate crimes and illegal logging, was estimated at 50-152 billion USD per year. This makes the illegal forest sector larger than other illegal wildlife trade such as in animal products (estimated at 7-23 billion USD per year) and the illegal fisheries trade (estimated 11-24 billion USD). Corruption in the forestry sector alone was estimated at 29 billion USD per year by INTERPOL. Forest crime occurs particularly in the tropics, where a substantial part of logging and deforestation is illegal. Satellite data from 2017 illustrates global deforestation occurring at the rate of 40 football fields per minute. Annually, this corresponds to forest loss the size of Italy.

Brazil experiences the greatest rate of deforestation: about one football pitch of rainforest per minute. In 2017, the country lost 4.5 millions of hectares of forest, three time more than DR Congo, and the country ranked second in terms of deforestation. Brazil and DR Congo also rank high in terms of forest-crime related murders. DR Congo has had the highest victims among law enforcers and park rangers. Globally, Brazil has the highest number of land and environmental defender murders, with a high proportion of crimes committed in the Brazilian Amazon, where gunmen threaten and kill resistance against illegal logging. 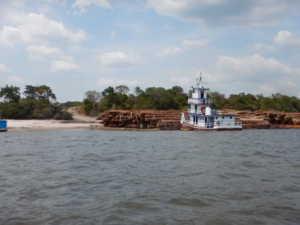 For fifteen years, I have been doing criminological research on illegal logging and tropical deforestation. Since 2010, I’ve conducted research in the Brazilian Amazon, initially as part of a green criminology project with Brazilian Universities and NGOs, funded by the Dutch NWO-WOTRO Science for Global Development programme (2010-2016), in collaboration with public prosecutors. The research focused on identifying social and environmental crimes relating to deforestation. The development strategy focused on improving the rule of law, by increasing access to justice for traditional communities that oppose deforestation by loggers and cattle or soy farmers.

Traditional communities in the Amazon often fall victim to deforestation, but their presence in rainforests also offers opportunities for forest crime prevention. The so-called “crime drop” that several western countries have experienced is explained by an increased security and decreased opportunities for crime. Situational crime prevention, often by non-law enforcement actors, has reduced crime opportunities and led to drops in various types of crime. This poses the potential for a rainforest equivalent to be developed with the use of local intelligence to detect and prevent forest crime opportunities.

In 2014, I initiated a crowd-funded criminological pilot project for community-based forest crime prevention at several deforestation hotspots in the Brazilian Amazon (Forest Forces). Several communities were equipped with waterproof GPS-cameras. Those who did not have access to electricity and mobile phone network, were given power banks and portable solar chargers. The pilot tested whether GPS-referenced pictures of forest crime activities would reach the forest law enforcement system and be followed by successful law enforcement action. Of course, the pilot should not endanger the security of community members taking pictures of illegal forest activities.

Brazil’s forest protection system is satellite and GPS oriented – this sophisticated rapid-response satellite system can automatically detect and locate large-scale deforestation. Perpetrators have, however, adapted to the satellite enforcement system, by shifting to small-scale deforestation, acting during the night and more frequently during the rainy season, when clouds block the view of the main satellites. 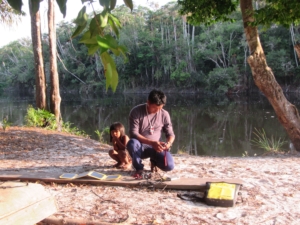 The criminological pilot aimed to test whether remote forest communities would take GPS-referenced pictures of illegal forest activities to law enforcement and justice actors, located in a distant town. Over three years, positive results have been shown in some, but not all, of the five communities, with success dependent on the level of community organisation and leadership. The field experiment was very effective in the only indigenous territory. This was expected because Brazil’s Indigenous Territories have invisible GPS-borders, with outsiders not permitted to enter without permission. Indigenous Territories are regularly subject to trespassing by loggers or gold prospectors. Illegal loggers seek large, high value timber trees such as “ipé”, which is commonly exported.

A GPS-camera allowed a twelve-member surveillance team of Maró Indigenous Territory to collect GPS-evidence of illegal activities within their territory. The chief, Odair “Dadá” Borari, brought pictures with GPS-coordinates to the Environmental Inspection Agency, IBAMA (Brazilian Institute of the Environment and Renewable Natural Resources), in Santarém, Pará. The pictures showed stocks of logs and buildings of timber companies with GPS coordinates suggesting their location inside Maró Indigenous Territory. When GPS-coordinates were entered into IBAMA’s satellite system, IBAMA’s satellite pictures confirmed the location of the crime spot, showing the same timber stocks and buildings. This led to helicopter surveillance being initiated the same day to confirm the spot and hence the illegality. Eight logging concessions were cancelled and several timber companies were expelled from Maró Indigenous Territory, with impacts for long-term deterrence of illegal logging. This project exemplifies how local forest protection, even in remote areas without electricity and telephone, can be carried out effectively and inexpensively by supporting communities with access to trusted law enforcement actors. The model can be replicated in other areas, especially in indigenous and other protected areas with GPS borders.

Whose voice counts in Illegal Wildlife Trade policy? Beyond London 2018